Musicology and other subjects 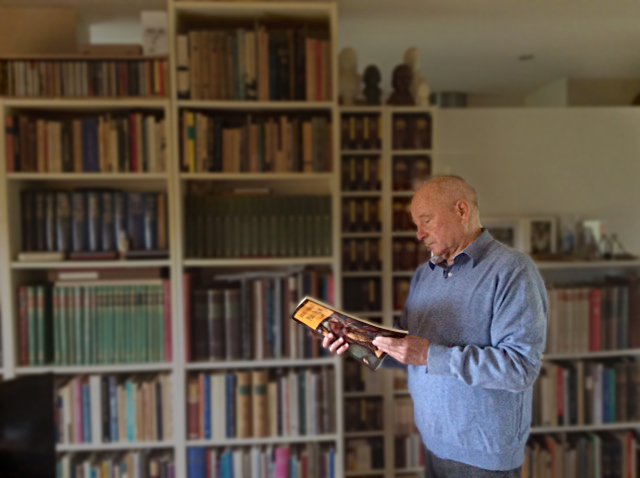 My name is Hans van Dijk. I was born on the 12th of July 1945 in Enschede (The Netherlands). After highschool I studied at the Twents Muzieklyceum in Enschede; my principal subjects were education in music at school, recorder, harpsichord, organ, choral conducting, orchestral conducting and music theory. Later on I studied at the Trinity College of Music in London (harpsichord and musicology.) After illness and death of my professor I continued my studies in musicology at Utrecht University and took my doctoral degree with professor dr. Marius Flothuis on a dissertation about the Dutch composer Jan van Gilse.

I have been working as a highschoolteacher and as a professor at the Utrecht, Maastricht and Liège conservatories; then I became a reader at Louvain University and after that an appointed professor at Mount Holyoke University (South Hadley, Mass. USA). My main tasks were the education in musical and cultural history, in which I have specialised in Baroque and in Dutch music in the period of 1890-1950. I also teached palaeography and 17th and 18th century music theory. I was superannuated in 2009. Until now I have written 18 books on musical and cultural history and a lot of articles on diverse subjects. As a hobby I write novels (under a ‘nom de plume’) and I am in the board of several institutions in the field of culture and science.

I have given many lectures, the material of which has not been published. Some of this I still make available to interested parties. Furthermore, my areas of interest are further elaborated, including those where there are no interfaces with music..

My passion for Bach is not so difficult to explain.

From my earliest youth I was brought up with Bach. My mother was a keen singer, who sang much for and with her children; she was a member of the local choir (‘Toonkunst’ Enschede). Every year St. Matthews Passion was performed and as a boy I joined in the performance with ‘O Lamb of God, most holy’ and ‘O man, thy grievous sin bemoan’ (sung in German, of course).

In the fifties that great organist and conductor Charles de Wolff became the conductor of ‘Toonkunst’ and I became his pupil for organ and musical theory. Within two years I was able to play the two-part Inventions at the organ and the more simple preludes and fugues, after a few years also the trio-sonatas (exept the one in e-minor, which I never managed), etc.

After my schooling as a choral and orchestral conductor I got the opportunity to perform a lot of Bachs vocal works: the cantatas, masses and passions with groups of (very good) amateurs and oratorio choirs. In the meantime I also profiled as a continuoplayer, both at the harpsichord and the organ.

Since I have said ‘farewell’ to performing in public Bach has remained one of the strongest friends in my life and every day I start with listening to (or playing) his great music. I have never conducted the ‘Hohe Messe’ but as an organist and harpsichordist I have played the accompaniments many times. To me this Mass is the absolute magnum opus in the history of Western Music and Bach the greatest composer who ever lived.

There is nothing difficult about it. All you have to do is strike the right keys at the right time and the instrument plays automatically. 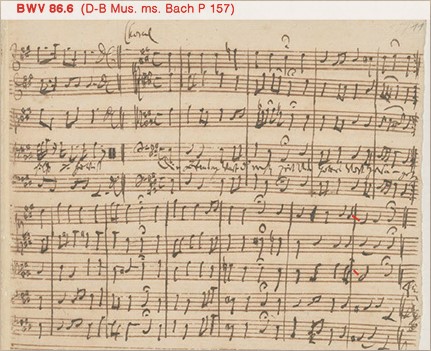 This music example shows the final choral from Bachs cantata no. 86 ‘Wahrlich, ich sage euch’ (‘Truly, I say unto you’). This choral is set for four voices, assisted by an orchestra of oboes, strings and continuo. Between the last bar but one and the last bar in the soprano- and in the tenorparts you see two little red-coloured lines indicating there is something wrong in the setting. The soprano has the notes f#’-c#’, the tenor has b-f#. Together this gives consecutive fifths, which was in accordance with the regulations in classical theory of harmonics not allowed. Did Bach make a mistake here? I think he didn’t. He made this even on purpose, because changement of the setting would have given a very nasty chord in the last bar. The text is here: ‘dess soll’n wir ihm [Gott] vertrauen’ (Thus we must put our trust in God). The word ‘vertrauen’ (‘trust’) gets a very euphonious chord which leads to a harmonious e-minor. This would not have been possible if Bach hadn’t given the ‘b’ as a second note in the tenor and left it a d’ in the bar before. So this is not a mistake but a ‘poetic licence’ of a great composer.

Music I prefer for the ears no. 1

One of the first records I ever bought was Bachs cantata 11 in English: ‘Praise our God, who reigns in heaven’ under dr. Reginald Jacques (London Bach Choir) with the famous Kathleen Ferrier singing the alto part. As one can hear the alto-aria in this work is very similar to the ‘Agnus Dei’ in the great mass. When as a young conductor I got the first opportunity to compose a program wholly of my own, I chose the ‘Agnus Dei’ and ‘Ah, tarry yet’ (‘Ach beibe doch’) from cantata 11 because the beautiful expressive singing of Kathleen Ferrier always moves me to the heart. She knew what the music and the texts were about and was able to pass it on to her public. I was lucky with my alto soloist, miss Hanny Borgerink of Enschede, who knew very well she never could surpass Kathleen Ferrier, but gave a performance of both arias that moved the public to tears.

In later years I had the honour of meeting miss Winifred Ferrier, sister and biographer of Kathleen and dr. Thornton Lofthouse, who played the harpsichord on the record mentioned above, with whom I could study for about a year.

This concerto concerns me deeply. It was the first one I ever played in public with an orchestra. It was during my studies with professor Thurston Dart in London in the late sixties and it was the only occasion before his illness and early death he supervised the performance of this marvellous work he himself had played so often in his carreer. The performance took place in the auditorium of the

‘Trinity College’. I don’t remember who conducted the orchestra (consisting of students). A Finnish student played the first harpsichord, I played the second one and a French young lady the third one.

This concerto is an arrangement, made by Bach himself of a concerto for three violins. In my opinion the three-harpsichord-version even sounds better. Make your own choice.

Music I prefer for the ears no. 2

During my musical education as a recorder-player at the ‘Twents Muzieklyceum’ in Enschede I discovered the second Brandenburg Concerto by Bach. With a few fellow-students we tried to

master it in some weekly rehearsals in the Basilica of St. Plechelmus in Oldenzaal, where one of us was an appointed organist. We never came to a performance in public of this ‘Brandenburg’ because there was no good trumpeter who could play the very difficult and extremely high trumpet-part. We tried the e-flat clarinet, the soprano saxophon and a few other instruments but none was satisfying. We never tried the horn. Some ten years later, when studying with prof. Thurston Dart in London he told, he was preparing a new recording of the ‘Brandenburgs’, using a horn in the second concerto (to be played by Barry Tuckwell; thus the trumpet-part sounded one octave lower!) This recording was made in february 1971, a few weeks before prof. Dart’s death. It has been the last time he played the harpsichord in a recording. Unfortunately this recording is not (yet) available for playing on youtube; as far as I know it’s the only one using the horn. So I had to present some other performance. My favorite trumpeters are Chrispian Steele-Perkins, Anna Freeman and Ludwig Güttler.

This cantata means a lot to me because it was the first one I ever accompanied at the harpsichord. The performance took place in Hengelo (The Netherlands) in 1965 and was conducted by my great preceptor Charles de Wolff. I especially remember this concert in which the bass singerAnton Eldering took part. He was a principal singer at the opera-company ‘Forum’ in Enschede and generally known by his ‘Osmin’, his ‘Sarastro’ and his ‘Hans Sachs’. But he could also sing Bach and Handel in a fenomenal way. In Enschede he sang the part of Christ in ‘St. Matthews Passion’ for many years. Unfortunately no recording was made of the performance of BWV 129 in 1965. I have only the recording of one concert under my direction of Cantata 4 and the ‘Requiem’ by Mozart, made in Almelo in May 1973. As far as I know there is no recording of BWV 129 under the direction of Charles de Wolff either, but at youtube I found a recording of the ‘Mainz Domchor’, directed bij Karsten Storck, which sounded almost in the same way Charles de Wolff interpreted this beautiful work. So I dedicate this recording to the loving memory of Charles de Wolff and Anton Eldering.